Tonight is the first night of my fifth Chanukah as a Navy wife, so I thought I would share the story of how Sampson and I spent our first Chanukah as a married couple. (The following story was originally published elsewhere as part of last week’s MilSpouse Holiday Blog Swap; I am sharing it here for readers who may not have had a chance to bounce from blog to blog.)

When Sampson and I moved to Kingsville, Texas just days after we said our vows under the chuppah and danced the Hora with family and friends, we joked that we were doubling the town’s Jewish population. That was an exaggeration, of course, but not by much: even larger South Texas cities are not exactly known as Jewish cultural centers, and Kingsville was shockingly small to someone who had lived in the comparatively diverse Washington, DC region her entire life.

The frenetic pace of Sampson’s advanced flight training coupled with the staggering, wonderful novelty of finally being married after a half-decade of long-distance romance made our newlywed year speed by, and soon December was upon us. As the all-consuming demands of the Navy would have it, that month ushered in one of the most intense phases of flight training: carrier qualification. Through countless hours of practice touch-and-goes at an outlying field, Sampson and his fellow the Student Naval Aviators had sought to burn into their brains and muscle memories the exacting pattern required to make a successful landing aboard an aircraft carrier. Now, they were about to face the real thing for the first time, and the dates happened to coincide with our first Chanukah as a married couple.

Chanukah is actually one of the lesser holidays on the Jewish calendar — a commemoration of a minor military victory and the small miracle of an oil lamp lasting days longer than it should have. It is not a “Jewish Christmas” in theme or relative significance. Still, it is a warm, homey sort of festival, and a time when families gather to light candles, sing old songs, and bring laughter and joy to the longest winter nights.

Sampson and I had long looked forward to building our own family traditions around these eight evenings, with favorite latke recipes and silly dreidels and beautiful chanukiyot (menorahs) to enjoy year after year. The needs of the Navy allowed us the very beginning of our first Chanukah together before Sampson and his class headed to Florida and thence to the USS Boat, where they would put their long hours of training to the test. We did not know how many days it would take to complete CQ, but it seemed fairly certain that I would be spending the remainder of the festival alone.

Those were anxious days for me. My husband was strapping himself into a single-engine jet aircraft all by himself, flying out over the water, and attempting to land on a moving postage stamp in the middle of the ocean by snagging a wire stretched across the deck with a hook on the back of his aircraft. Oh yeah, and every single one of those traps (arrested landings) was being scrutinized and graded. Not everyone qualifies their first time at the Boat. Some people never figure it out, which can end a pilot’s career before it truly begins.

Each day I attempted to distract myself from my preoccupation, and each night I did the best I could to celebrate Chanukah all by myself. Our flight school friends were all putting up Christmas trees, and our nearest Jewish acquaintances were forty-five miles away in Corpus Christi. I missed my husband, and I wasn’t feeling very social without him, anyway. As the number of candles I lit each night increased, so did my nervous anticipation of the phone call that would tell me how CQ had turned out. 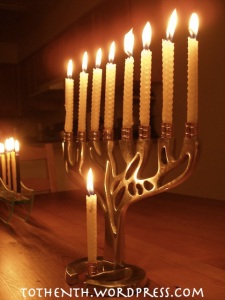 hen the call finally came, I made Sampson repeat what he said twice to make sure I was hearing correctly. “I’m a qual! I passed!” I was ecstatic. My husband was officially a tailhooker! I was so relieved and excited for him that I almost didn’t catch it when he added, “…and I’ll be home in time for the last night of Chanukah.” When that last bit sank in, I literally jumped up and down for joy.

The memory of what followed is as much a part of our Chanukah tradition as the scent of beeswax or the glint of foil-covered chocolate coins. The next day, Sampson arrived home to find a “Congratulations, Tailhooker!” sign on our door and an immensely proud wife waiting to greet him behind it. We grinned at each other as we lit two chanukiyot to their full capacity, in celebration not just of a victory long ago, but of the small miracle of being unexpectedly together for the culmination of our holiday — minor or not.

3 thoughts on “My First Navy Chanukah”