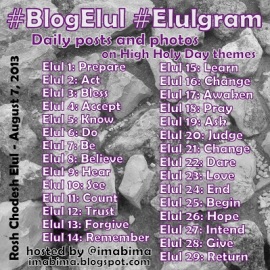 NB: I know it’s not the 8th of Elul. We just got back from visiting family in southwestern Florida, so I have a little catching up to do.

I already talked a little bit about that troublesome B-word, “believe,” in my second #BlogElul post. When we say today that someone “believes” something, we usually mean that the person has “confidence in the truth, the existence, or the reliability of something.” It’s a purely notional exercise: either we think a thing is true or we don’t.

As someone who grew up in the modern West, science is the primary lens through which I have been trained to view the world. When it comes to chemistry or mathematics or engineering or (my field) computer science, we do not accept as true — believe — a particular concept without first gathering supporting evidence. Every schoolchild learns about the scientific method of developing a hypothesis, testing it against the evidence, and only then deciding whether the evidence verifies the hypothesis.

The problem is that the truths of religion do not necessarily lend themselves to a yes/no, true/false binary. We cannot develop an experiment to determine empirically the veracity of a spiritual insight. And yet, we use language that assumes that religious truths are in the same category as empirical truths. My inner scientist squirms when someone asks me what I believe; I cannot answer that with a list of peer-reviewed facts.

If I had my choice, I would prefer to return to a much earlier understanding of the word “belief.” Our word in English came from a West Germanic word meaning “to hold dear, esteem, trust.” That definition resolves my inner conflict between the scientist who hesitates to make any assertions without hard evidence and the intuitive soul who trusts in the insights of her Jewish tradition.

Rather than asking people what they believe, as if they should be able to produce a list of facts and supporting experimental data, perhaps we should try asking our fellow human beings what they hold dear.