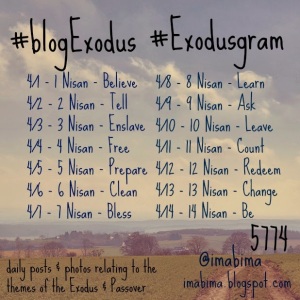 Believe, believe… I believe I need to get my rear in gear for Passover preparation, because I just had my very first Pesach stress-dream of the season last night.

We had just arrived back in Pensacola after a whirlwind jaunt up to Northern Virginia to celebrate my amazing father-in-law’s 70th birthday. While my parents’ guest room is quite comfy, the sheer concentrated fun of the short visit meant that we were up past our bedtime every night. We arrived home yesterday evening after a day of schlepping through crowded airports, looked at the flight schedule, and discovered that the Navy was welcoming Sampson back from leave with a 5:30 AM brief. So much for easing back into things.

My attempt to squeeze a few more hours of rest out of the pre-dawn darkness after Sampson headed to work was thwarted by an intensely vivid dream about showing up at a seder where they were using a strangely colorful Hagaddah and playing rock music for accompaniment. The “stress” part of the dream came halfway through the (bizarre, rock-and-roll-laden) service leading up to the meal, when I realized we had forgotten to make the dish we’d promised to bring. Ack! The shame!

And then the dream morphed into me and Ecco the Dolphin rescuing other dolphins who were beached on a marshy shore, but that is less relevant to the subject at hand.

In real life, some friends from our synagogue have invited us to their seder this year. I already know that our contribution to the festive meal will be a vegetable dish of some kind, but I haven’t made a final decision on what it will be. My dream would seem to indicate that the prospect of cooking something to delight the palates of twenty-one people is weighing on my mind more than I’d realized.

I believe I’ll get out my cookbooks and make a final recipe choice today.

#BlogExodus, the brainchild of Rabbi Phyllis Sommer, invites participants to chronicle the weeks leading up to Passover through blog posts, photos, and other social media expressions.