Underwear Parties, how old is too old? submitted by Wookie & Co.

If you’re going to have an underwear party, I think you should probably wear some of your newer stuff. No one needs to see frayed elastic or worn bra straps, and faded colors just wouldn’t contribute appropriately to the festive atmosphere.

Oh, did you mean the age of the wearers? Context would seem to be more important than age. I must admit, though, I don’t foresee that particular context popping up in my post-collegiate life unless my husband and I by ourselves constitute a “party.”

What was your favorite class in high school? submitted by Adventures of M-Squared

Anthropology was both fascinating and a lot of fun. Highlights included:

– A trip to the National Zoo to observe primate behavior

– A contest to see who could, using only one’s feet (any use of hands was disqualifying), peel a banana and lift the fruit to one’s chin the fastest

Come to think of it, I wish there had been time in my college schedule for an Anthro course. There was much wailing and gnashing of teeth when major requirements precluded my taking “The Anthropology of Star Trek.”

Have you ever convinced packers/movers to pack something they aren’t supposed to for a PCS? submitted by Ground Control to Major Mom 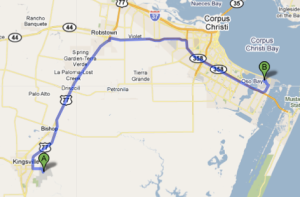 K-rock to Corpus: our fastest PCS ever.

This one gets a resounding “maybe.” When we moved from Kingsville to Corpus Christi, the entire pack-up, transportation, and unload process took place in the space of a single day. I’m pretty sure the packers threw it all in with little regard to what was technically allowed, since none of it would even be staying on the truck overnight.

That packing/moving team was fantastic. They were efficient, friendly, and motivated to get everything done in one day. Contrast that with our move (just over three months later) from Corpus Christi to Virginia. The lack of professionalism from that team was a huge disappointment after having had such a good experience only a few months prior.

Blogging plays a growing roll in the media. If you were asked to embed as a blogger with a deployed military unit, would you go? What do you think your blog would be like? submitted by To the Nth

Since I asked the question, you can probably guess that yes, I would participate in this hypothetical embedded blogger program. Specifically, I would want to share the story of a Navy squadron. When people outside the military community hear “deployment,” I believe the images that spring to mind for many involve Iraq, Afghanistan, and the Army. Our military and its activities throughout the world are far from monolithic, though, and I would want to shine some light on that heterogeneity. 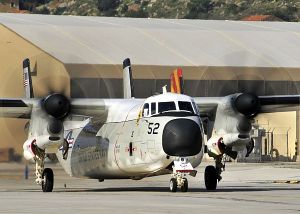 CODs fly out of all kinds of places -- like Greece -- over the course of a deployment. (U.S. Navy photo by Paul Farley/Released)

Let’s say I were embedded with the aforementioned Navy squadron, and let’s make it a COD detachment such as my husband is on now. Sampson jokingly refers to a COD det as a traveling rock-and-roll show: although the pilots fly out to the aircraft carrier on a nigh-daily basis, they live on land. Where on land, specifically? It changes — as quickly as every few days, in some cases — as the ship moves. When the carrier is transiting from one place to another, the men and women on the COD det have to pack up, move, unpack, and set up a base of operations in a new place. The logistical feats they perform are monumental, yet largely invisible to the people on the aircraft carrier. The Boat, collectively, cares only that their cargo shows up, the mail gets there, and the VIPs arrive and depart as scheduled. Those aboard don’t necessarily see the mad scramble necessary to do it all and make it look easy.

The up-close and personal nature of most blogs would be well-suited to highlighting the diversity of the military experience, even within the same branch of the service. A blog filled with those day-to-day struggles, annoyances, and yes, occasional sweet deals (hey, COD guys do get to live on the beach instead of being stuck on a giant gray floating monstrosity) might shed some light on their efforts. Maintaining OPSEC would no doubt require some special considerations about what to publish, but I believe there would be a way to honestly tell the stories of the people who come together to perform a given mission.

Do you think kids should attend year-round school? submitted by Marrying the Navy

I believe kids should learn year-round. I also believe that a significant chunk of learning should not be restricted to the classroom. Kids need time to explore the world beyond the building where they spend the majority of their day in a room with only their peers and a single adult running the show.

Are you a military spouse/fiancée/fiancé/girlfriend/boyfriend? Hie thee to LTJG Wifey’s blog, snag the questions, and add yourself to the Mr. Linky for this week’s MilSpouse Friday Fill-In!